Yorkshire born artist Peter Brook is one of the North’s most iconic artists. His paintings have captivated fans for over 50 years and his work continues to attract new collectors from around the UK and abroad, despite his passing away in 2009.

AC Gallery in the heart of Kendal have been closely associated with Peters work for over 18 years and they are, without doubt, the experts in all things “Peter Brook”.

AC Gallery are therefore excited to be exhibiting a selection of original paintings and rare signed prints in their Kendal gallery, located at 7 Elephant Yard from 23rd February to 9th March. This gives locals and visitors a unique opportunity to see, and buy, work by this highly sought after artist.

Peter’s career is an interesting journey (a full biography is available on  request) and, despite ‘making it’ as a full time artist in the 1970’s it was only late in his career when widespread recognition really came calling at his door.

His work had been held in the Tate Gallery collection for some time but when they featured Peters images in their diaries the level of interest in his work really started to take off. Since Peter’s death in 2009 his work has become increasingly sought after and AC Gallery has become a magnet for many a Peter Brook fan, with all their branches permanently showcasing Peters work. His originals are seen as highly ‘investable’ with the value of his work rising year on year.

Gallery owner Mike Baggs says “Over the last 12 months we have continued to see an ever increasing level of interest in Peters work. Many art lovers are drawn to his work as it is so unique and it really connects with people. Peter’s art appeals to people of all generations and one of the nicest things we see is the number of new fans that ‘find’ his work every year and start collecting his prints or come in to invest in an original. Many aim to own an original and these are now widely seen as shrewd investments, as are the signed prints. One collector told us that the head of art at Bonhams recommended Peters work as one of 10 artists whose work any collector should have. Peter’s work is like no other – it’s very special. He was widely admired not just as an artist but as an individual too. He was a really down to earth, genuine, character and I think that comes across in his work. You can get a sense of his personality in many of his paintings. We are very fortunate to have built up such a large database of contacts over many years and it is from these contacts that we can draw in such a great selection of work, alongside some of the last remaining pieces from Peters estate, kindly provided by Peter’s family.

I will always be very grateful that I got to know Peter. We worked together for many years and Peter and his wife Molly became friends. I miss our regular catch up’s when we would sit and discuss many things aside from art. He was always good company. With the continued support of their daughters we will continue to fly the flag for this iconic artist.”

A little known fact is that Peter was a successful fell runner, taking up the sport in his 40’s. This love of the outdoors was a common theme for Peter but he would often spot potential subjects for his paintings whilst out running 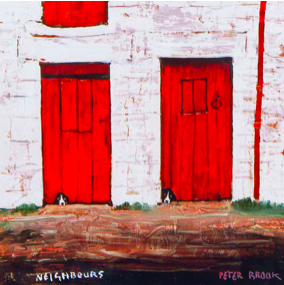 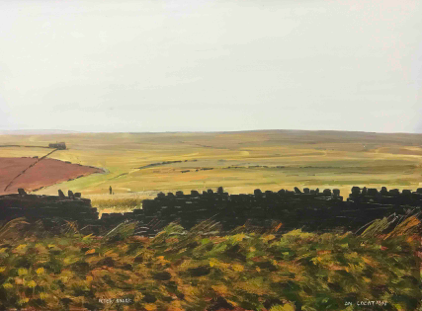