The 2021 Kendal Mountain Literature Festival programme has been unveiled; revealing a diverse programme of events featuring some of the UK’s foremost authors of nature, landscape and mountain literature.

The four-day literature festival, now in its fifth year, takes place from 18 – 21 November as part of Kendal Mountain Festival; the largest and longest-running annual gathering of the outdoor community in the UK.

Featuring over 25 authors, poets and writers sharing the latest and very best outdoor inspired literature from across the world. Cave diver Rick Stanton shares his new book Aquanaut, which follows the incredible Thai cave rescue in an edge-of-your-seat story of courage and conviction. Richard Walker, who owns the supermarket chain Iceland, will be on stage sharing his clear-sighted social responsibility with experience and inspiration for us all and Jemma Wadham will bring riveting stories of glaciers, wilderness and humanity to the stage.

Robert Macfarlane, acclaimed British writer and Kendal Mountain LIterature
Festival Patron said: “The Kendal Mountain Literature Festival celebrates the relations between people and places. Its many and varied events seek to emphasise connection and community in an age of division.”

Paul Scully, Festival Manager and Literature Programmer said: “We are thrilled to welcome so many incredible writers to the Festival and look forward to being inspired, challenged and provoked by the ideas and imagination of those who have immersed themselves in the natural world.”

For those who can’t make it to Kendal this year, the Festival will be recording all events and sharing these via the Kendal Mountain Player.

Festival dates are 18-21 November and you can explore the full programme here. 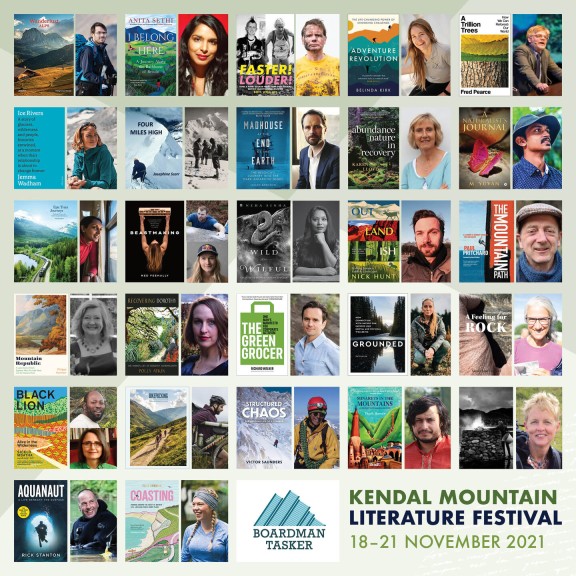