Explore Innocent Food and Drink at the Quaker Tapestry Museum

The Quaker Tapestry Museum is a stunning collection of 77 embroidered panels.

The colourful tapestry panels measure 63.5cms x 53.3cms and are made using a mix of five ancient stiches and a new one, invented for the project. The ‘Quaker Stitch’ is now used by embroiderers around the world.

World traveller and writer Alexander McCall Smith, says they’re one of the ‘six best tapestries’ to see in the world.

The panels help you find out about famous scientists, engineers, bankers, botanists and non-conformists who pioneered industrial welfare, fair trade, prison reform, peace work and anti-slavery initiatives. Many were Cumbrians.

Begun in 1981 and completed in 1996, they’re the work of 4,000 men, women and children from around the world. Some of the panels made journeys of thousands of miles as they passed from one group of people to another.

The 18th and 19th centuries saw the setting up of many food and drink related Quaker enterprises. These were termed innocent trades. To Quakers, innocent meant trading fairly with prices fixed rather than bartered, paying off debts, and not engaging in businesses with military links. One of the embroidered panels within the Quaker Tapestry is devoted to trades. It lists those that were considered acceptable – including food production and canning. 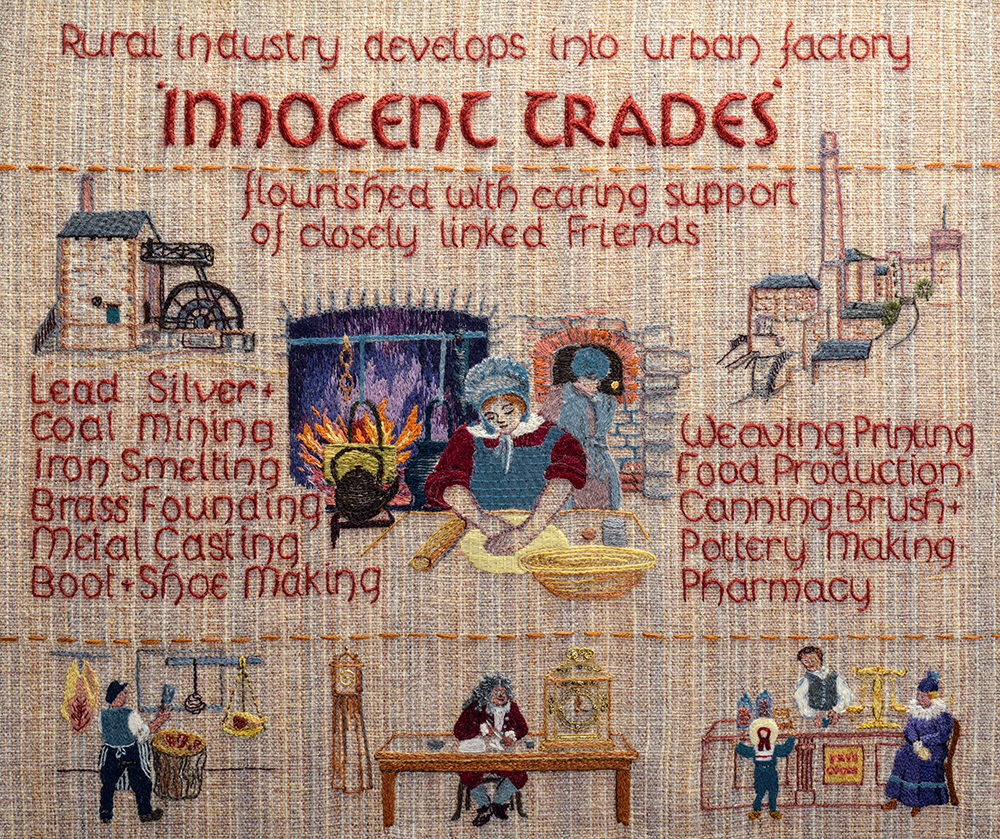 When it comes to food, people often think that Quakers make oats. But they don’t. They just share a name with the famous brand behind breakfast staple, porridge.

Rather, Quakers are linked to confectionery and biscuit companies that are still around today. Think of Cadbury of Birmingham, Rowntree’s of York, and Fry’s of Bristol. They were all set up by Quakers who believed cocoa and sugar were better alternatives to alcohol at that time. 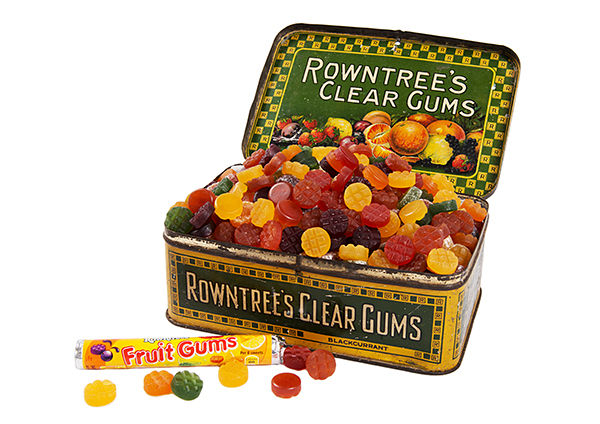 And for many Quakers being in business required determination and bravery. Take Mary Tuke (1675-1752) who started a firm that became, seven generations later, the Rowntree Chocolate Company. Mary opened her York grocery shop in 1725 and fought a long and persistent battle with the powerful Merchant Adventurers’ Company in order to trade. She ignored the threats and fines imposed by them and, after seven years of dispute, the powerful monopoly eventually agreed that if she paid a small fine, she could trade legally. And thank goodness she did.

Many food businesses start out as kitchen table enterprises, and that was the case with the Huntley and Palmer biscuit manufacturing company. A Quaker set-up that became one of the world’s first global brands, it ran what was once the world’s largest biscuit factory. Its humble origins are depicted in the Innocent Trades panel. Working at a table, in the centre of this panel, and in front of the fire is a lady making Huntley and Palmer biscuits.

The blazing hot, embroidered kitchen fire is a wonderful example of both creative embroidery and the use of colour. Using only six stitches, but with such a sure touch we can almost feel the heat of the fire! 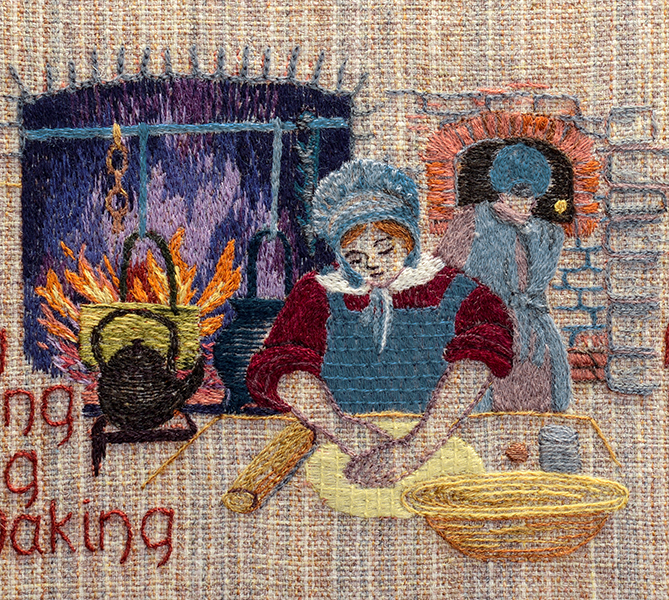 On the bottom left of the panel, we see Luke Cock, a 17th century butcher of Staithes near Whitby. His conversion to Quakerism revolutionised his attitude to business, so that he became known as ‘The Honest Butcher’. On the right, there’s a grocer serving a small boy – who leans, no doubt longingly, against the chocolate counter.

Our interactive exhibition on the theme of money, shoes, chocolate also provides an insight into food and drink related Quaker businesses. 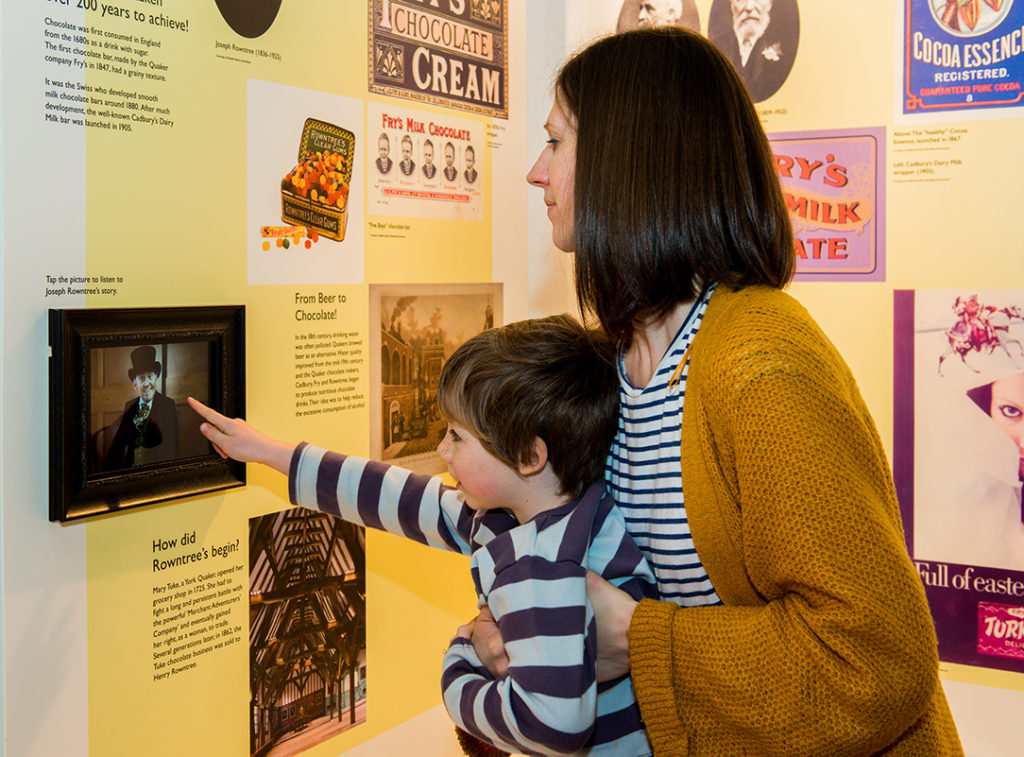 In 1826, John Horniman (1803-1893) founded a tea company in the Isle of Wight. He invented a tea bagging and sealing machine to ensure that his tea could not be adulterated by unscrupulous shopkeepers trying to add cheaper leaves not from tea plants. The John Horniman’s Children’s Trust is using his legacy today.

In 1836, John Farrer of Grayrigg started a tea and coffee business in Stricklandgate, Kendal. After fifty years in the business, he handed it over to his two nephews Joseph and Edward Farrer. They continued the business well into the 20th Century. Today, in different ownership, the popular Kendal café and shop retains the Farrer name and its original shop front.

You can see this panel and others when the museum reopens in May. Check visiting times and book 24 hrs ahead, through their website. There’s no extra charge, you’re guaranteed entry and a crowd-free visit.