Kendal boasts an incredibly diverse range of businesses including Horsley Couture, who pride themselves on high-quality British manufacturing inspired by the wool heritage here in Kendal. Here’s more from owner Elle:

We make all the garments ourselves, in our factory in Kendal, Cumbria, where we have a dedicated team of accomplished ladies stitching away to carefully produce every garment. The fact that we’re based in Kendal isn’t really a coincidence, as this Cumbrian town has a fascinating history when it comes to wool. This is reflected in the town’s coat of arms and in its Latin motto ‘Pannus mihi panis’, meaning wool (literally ‘cloth’) is my bread.

The earliest date we can track Kendal’s wool industry back to is between 1246 and 1260, when the earliest document in existence relating to Kendal is a Charter issued by the then Baron of Kendal, Peter de Brus. This discussed the rights to setting out agreements with fullers and dyers – therefore demonstrating that the wool industry, which was later to become such an important aspect of the local economy, was active even at this early stage.

However, it was not until the fourteenth century that the wool business began to flourish. Kendal’s position as a natural geographical centre for the Westmorland wool industry, together with a growing wool trade, helped to transform local prospects at every level of life.

Kendal had developed as a thriving centre for a rich area by the 1500s, and the granting of borough status by Elizabeth I in 1575 with its accompanying charter putting all the finishing trades and marketing into the town’s hands was confirmation of its role. During this period, working folk (95% of the population) had by law no option other than to wear the harsh, thick woollen cloths, all plain or single-coloured, in which this area specialised.

The woollen industry remained Kendal’s principal business up to the late 19th Century. As the industry grew, so did the town’s size and prosperity, and it was not until the Industrial Revolution that the trade moved out to the mills in Yorkshire and Lancashire.

The Kendal Pattern Book of 1769 was discovered during the second World War by a Mr Jimmy Rigg. The book contained 498 samples of linsey-woolsey cloth, covering a full range of quality from everyday cloth for working clothes, to fabric of fine quality woven in surprisingly vibrant colour combinations. It subsequently came into the possession of local historian Jack O’Connor, who recognised it as an interesting and valuable link with the woollen trade of Kendal.

The book generated great interest and is now regarded as one of Kendal’s many treasures, and an exhibition showcasing the book was held at Kendal Library in the summer of 2010. Even today, if you walk around Kendal, you will still notice memoirs of the industry in the various signs and street names (e.g. Tenterfell – the tenter was the frame on which wool was stretched and dried).

Isn’t that absolutely fascinating? Horsley Couture love to take inspiration from Kendal’s heritage, and the surrounding areas in the beautiful Lake District. You can take a look at everything that inspires the Horsley Couture designs on their Pinterest page. 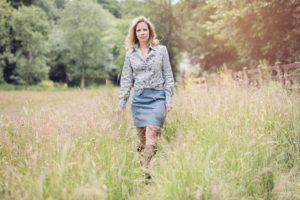