After a successful run at Edinburgh Fringe Festival People Show’s 130th show is back on tour and coming to Kendal! A comic two-hander from the UK’s longest running experimental theatre collective, The Last Straw has been described as “waiting for Godot for the post – truth age”. The Herald

People Show’s 130th show, The Last Straw challenges audiences to consider the dystopian absurdity of modern communication. Confined in an unidentified liminal space, a man and a woman are trying to pin down some facts. Hurried along by relentless content, stricken by disasters and facing problems varying vastly in scale, how do we know where to focus? How do we know what’s true anymore? With the facts literally shredded on the floor, we observe these people as they navigate love and loss as it intersects with the complexities of today’s world. Darkly comic, visually stunning and with breath-taking sound, this two-hander from People Show, was devised in just three weeks and previewed at Ovalhouse, London in February 2017. Since then it has been performed at Brighton Festival, Camden People’s Theatre and Edinburgh Fringe Festival (Summerhall).

Gareth Brierley from People Show said: “When we sat in the rehearsal room on the first day of rehearsal on a cold February morning, we had nothing. Not one bit of text, not one nice image, no catchy upbeat song, absolutely nothing. What we did have was our daily responses to the world at that precise moment and what was occurring every day in front of our eyes. Hate, fear, doubt, fake news, and a constant worry about the wifi were the pertinent influences smacking us in the face for three weeks. We made a show that reflected this world at that time, from a slightly askew angle that covered the global and the local anxieties combined. It was funny, visually beautiful and in it, we produced a stunning soundtrack that is an honour to listen to in every run through. In three weeks we produced a show from nothing, people came and it was fine, we didn’t die and the world didn’t collapse. It was a risk, but everything feels risky at the moment and on stage I wouldn’t want it any other way”

The Last Straw was dubbed “Waiting for Godot for the post- truth age” by The Herald ****.

and Total Theatre called it “an electric piece of absurdist theatre”.

The show was originally devised and previewed at Ovalhouse in February 2017 as part of the company’s 50th Anniversary programme and was nominated for a London Off West End award (Offie) in 2018.

8pm | Pay What You Decide 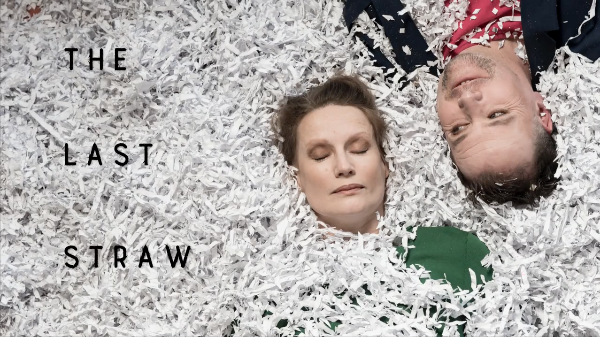