A collection of 2,500 miniature single malt whisky bottles, many rare and old, are being put up for auction by a Kendal businessman.

Experts from 1818 Auctioneers, tasked with the job of cataloguing, photographing and selling them, conservatively expect the unique collection to make between £20,000 to £30,000. The live online auction ends next Sunday (30 Jan).

“Not one is a duplicate and they include some very rare examples. We’ve split them into around 300 lots, ranging in value from £50 to £300,” says valuer David Hunter.

“It’s been a privilege for us to handle them and to learn about them from their owner, Keith Young. It’s an incredible collection and a history of Scottish whisky in miniature,” adds David.

Keith’s interest in miniature whisky began when he was first given one to display by his grandfather. Keith, who is the managing director of Grosvenor House Papers Limited and Papermilldirect, says he built up his collection over a 20 year period, ending in 2000. Keith says many miniatures were purchased from the UK miniature bottle club, who met each year in Blackpool for their AGM, as well as specialist whisky shops he found when travelling for work.

“Miniatures are a very affordable way to buy and try whisky. They are also easy to collect although research, pre-internet days, was a lot harder. I recorded each one on a spreadsheet so I knew exactly where the gaps where and then enjoyed exploring whisky shops to find the ones I hadn’t got.

“They were on display in my office, in cabinets and on shelves above the panelling. I am selling now whilst I am around to explain the collection and to ensure they not overlooked.”

Valuers David Hunter and Ken Payne say they are mostly single malts, including an extremely rare, limited edition, 1966 vintage Laphroaig from independent bottler Signatory. The miniature is estimated to make between £200-300.

Also included in the collection are several individual bottles of Macallan’s, in original boxes along with large collections of Signatory, Master of Malt, James MacArthur’s, Glen Grants and Cadenhead’s.

And there are 28 miniatures from 35 producing whisky in Campbeltown, Scotland’s smallest malt whisky area – today only three exist.

“We expect a great deal of interest from collectors and drinkers,” says Ken Payne.

“Both value the fact that each miniature tells a story of the liquid and the distillery. And that a miniature is cheaper by the measure, particularly when some bottles can cost thousands of pounds,” adds Ken.

Also being sold as part of the 1818 Auctioneers fine wines and spirits sale are empty whisky cartons, boxes and tins.

The sale coincides with Burns Night (Tuesday 25 January) when whisky is drunk to celebrate the birth of Scottish poet Robert Burns. 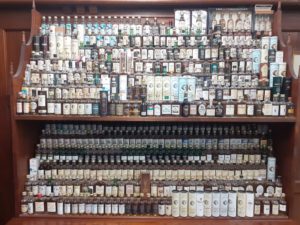