Lakes Alive returns in September with a packed programme of vibrant illuminations, digital delights, spectacular happenings and performances of dance, music and play.

The festival is expanding to take on new locations this year including venues around Kendal, Brockhole, Grizedale Forest and Grasmere.

The festival will open on Friday 6 September with the annual and ever-popular outdoor Jacob’s Join along the riverside behind Kendal’s Abbot Hall Park.

Last year hundreds of people enjoyed dancing and feasting before parading up to Kendal Castle. This year, party revellers will dance to an Asian beat and Dhol drummers will accompany the snaking parade to an ‘out of the world’ experience at the castle.

Fantastic Planet, Parer Studio’s two huge humanoid figures, will be in temporary residence among the castle ruins. The massive inflatable artworks, inspired by the 1973 film of the same name, raise questions about our relationship with the natural world, its fragility and the role of humanity within it through Parer’s play of scale, light, dark, drama and humour.

Festival director Phillippa Haynes said they will have spectacular happenings in magnificent landscapes to stimulate people’s senses and invite them to pause for thought: “Watch breathtaking, visually stunning and highly engaging performances, wonder at vibrant illuminations and be part of intimate performances. I invite all to just dip a toe in or dive in head first, to bring their family or a friend and bring a sense of fun and enjoy.”

Kerry Powell, director of communications and resources for the Lake District National Park Authority, which stages Lakes Alive, added, “This year I have been particularly fascinated by the work being done by the Lakes Alive team and festival artists in our communities. I’m looking forward to the stories produced by the 180 school children who have contributed to We Are Stardust, the performance of TOPOS by the Cumbrian Youth Dance in collaboration with Wired Aerial Theatre and to hearing Propellor Ensemble’s performance of Loom for which three local groups have been working with acclaimed composer and ensemble leader Jack McNeil. 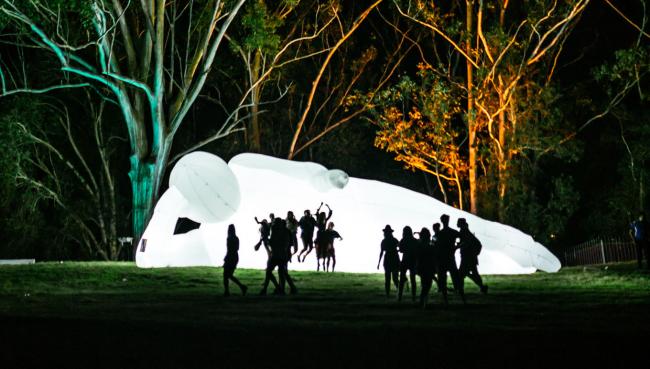